The Pros of a First Look

Of all of the wedding traditions, whether or not to see one another before the ceremony is probably one of the most widely talked about. We’ve met couples that are completely against seeing one another, couples that wouldn’t dream of not doing a first look, and a lot of couples that are somewhere in between. Some people wait to see one another until the moment the bride walks down the aisle due to tradition and to keep the moment more special, but we’ve heard from a lot of our couples that do first looks that the moment of walking into the chapel doors was just as special. On the flip side, a lot of couples opt to do a first look so they have double the special moments and the opportunity to get more photos done before the ceremony ever starts. Wherever you land, here are six benefits of opting to do a first look, plus a couple of options in case you’re looking for the best of both worlds. 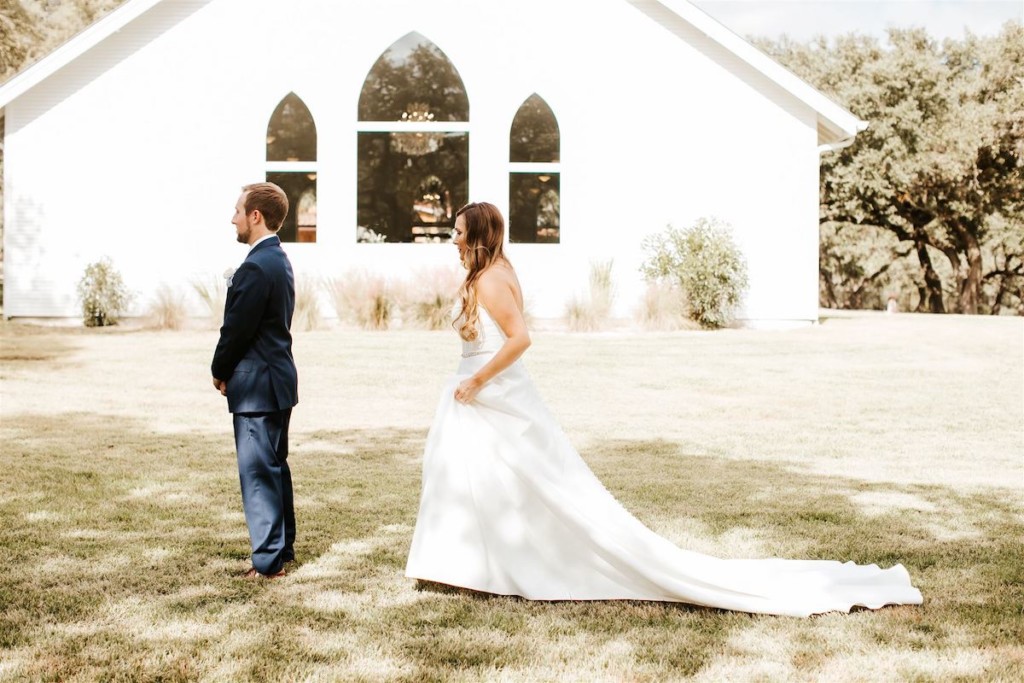 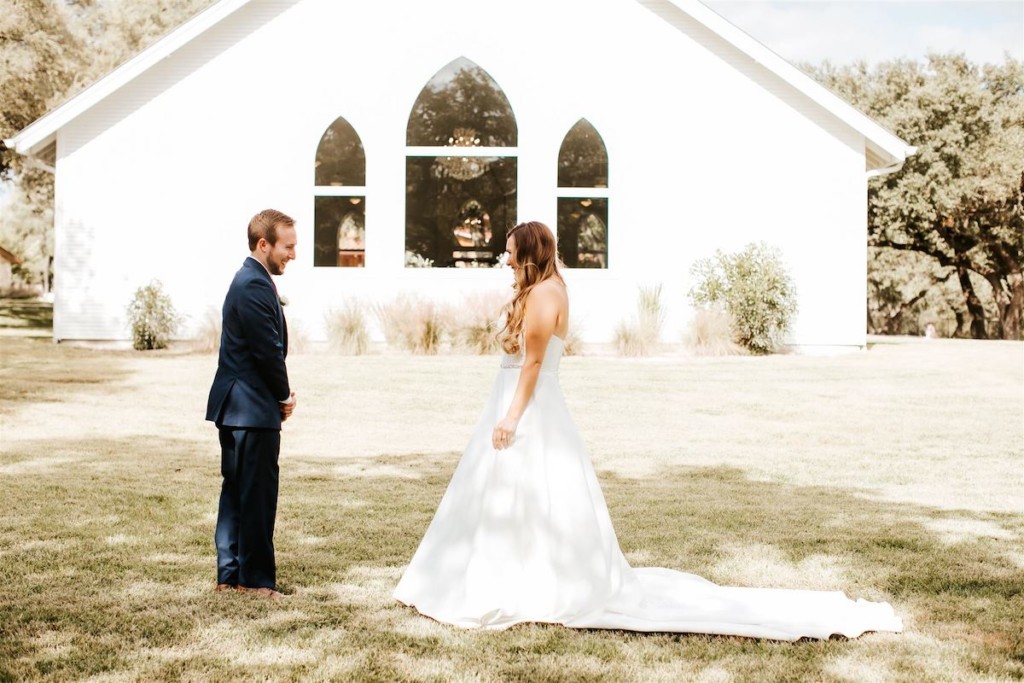 You get a moment for just the two of you.

First looks are incredibly special because they not only happen pretty close to the time when you’re about to get married, but they’re also ALL about the two of you. There is a ton of anticipation and excitement surrounding getting to see one another, so finally getting that look and being able to hug, kiss, and talk privately is a huge benefit to doing a first look instead of seeing one another for the first time when you walk down the aisle. Furthermore, the reactions are often a lot more authentic because you’re not in front of an audience – not that you won’t be feeling emotions while you’re walking down the aisle, just that you feel 100% free to be yourselves in that moment together. And, if you’re feeling stressed at all, we’ve heard from a lot of our couples that their first look helped them relax and enjoy the actual ceremony more.

You get more time for photos.

If you have a busy timeline, a lot of family members, a large bridal party, or a big list of wants for your photographer to capture, this is especially important. If you don’t have a first look, you can take photos before the ceremony that don’t involve you together as a couple, but any family portraits, full bridal party pictures, or couples portraits have to wait until afterwards. With a first look, though, you can schedule in plenty of time to relax while taking photos and not be trying to smush them all into cocktail hour.

You can attend your cocktail hour.

And speaking of cocktail hour, with a first look you can actually attend your cocktail hour if you want to. Since the majority of your photos will have already been taken, instead of utilizing the time to take all of your photos, you can snap a few quick photos to catch the just-married glow then go enjoy more time with your guests. We know you spend a ton of time planning out every aspect of your wedding, so you might as well get to actually experience the full effect rather than getting a handful of appetizers on a plate in the bridal suite while you wait to be announced. 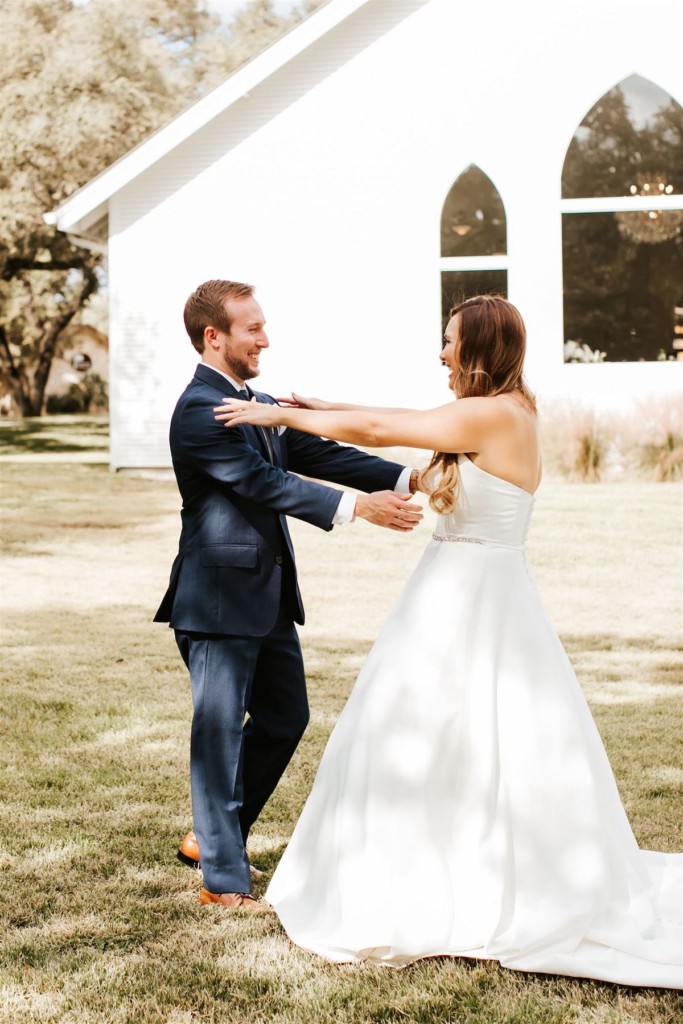 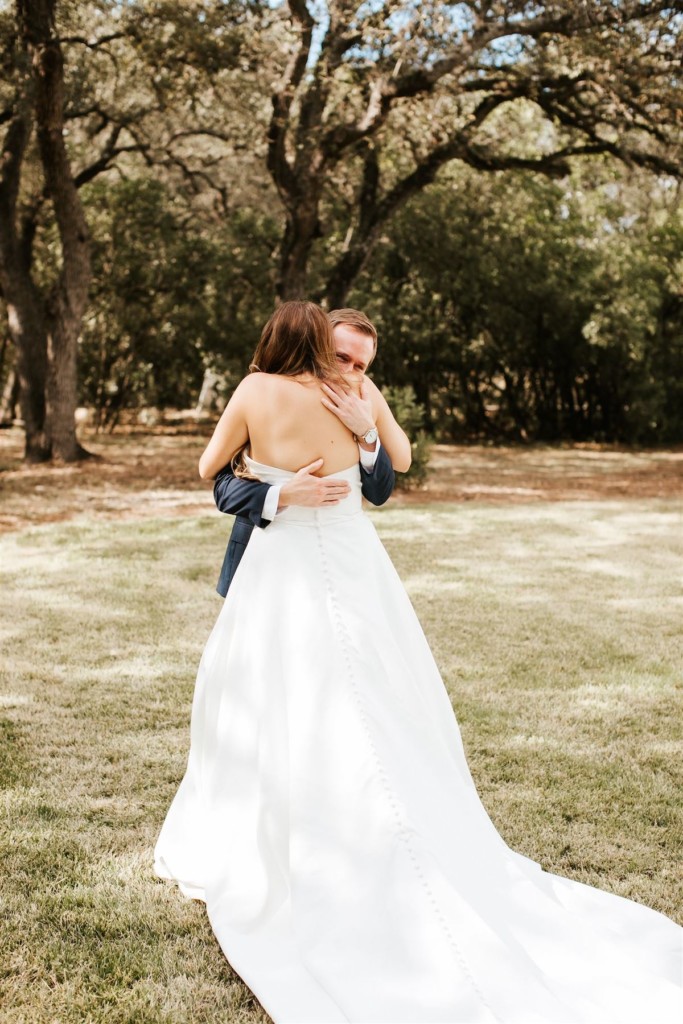 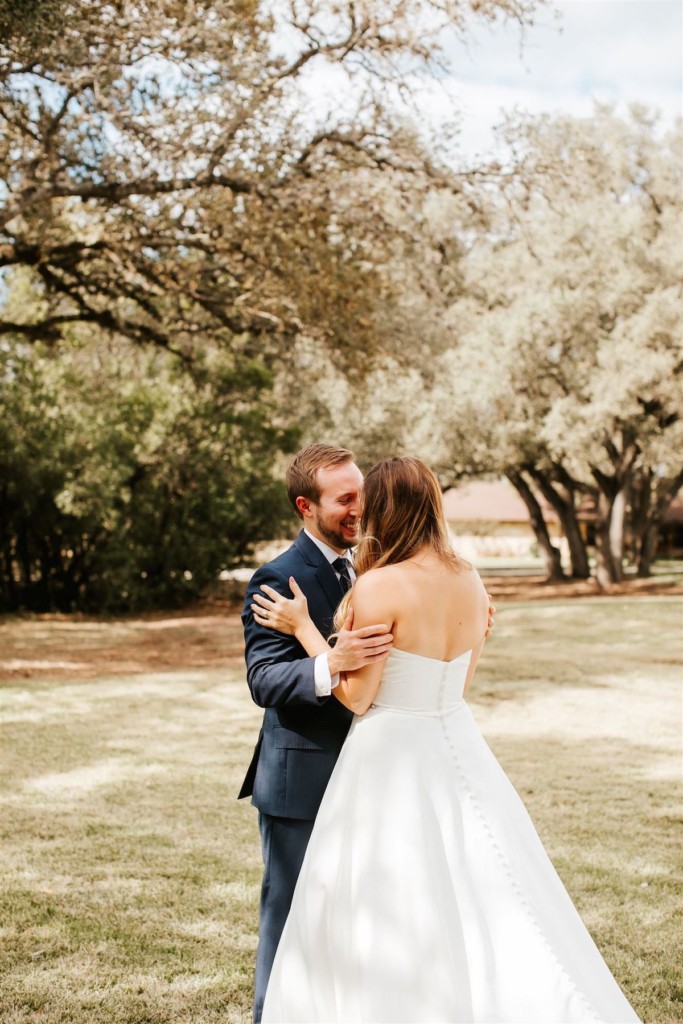 Your hair and makeup will be fresher for photos.

If you’re an emotional person, this is especially prevalent for you. You don’t have to worry if you spent your entire ceremony crying or if Texas humidity is giving your hair a fit because the bulk of the photos will already have been taken beforehand. We’re not going to dwell on this for long, because honestly most of the time you’re still going to look fantastic when the sparkler exit rolls around, but it is a plus for some people.

You can soak in the emotions of just being married without a timeline.

This is one of our favorite reasons for doing a first look. While it lets you have that private moment before you get married, it also lets you take a moment after the ceremony to just be with one another. You don’t have to get to pictures right away and the cocktail hour can wait. The timeline will be much more relaxed because after you say I Do it’s just about doing what you want and enjoying that time together. Heading straight into portraits when all of your family would rather be mingling can sometimes add stress, so knocking out these pictures ahead of time means you just get to be with one another.

We’re saying almost never because we don’t want to say never ever, but honestly it’s pretty close. Couples that choose to do a first look tend to love it. They love it for the schedule, for the special moment between them, for the fact that it didn’t dampen the specialness of walking down the aisle, and for a multitude of other reasons. If it’s not something you’re adamantly against – whether it be for tradition sake or another reason – it’s something we highly recommend considering because it is so loved by couples, photographers, and coordinators alike. 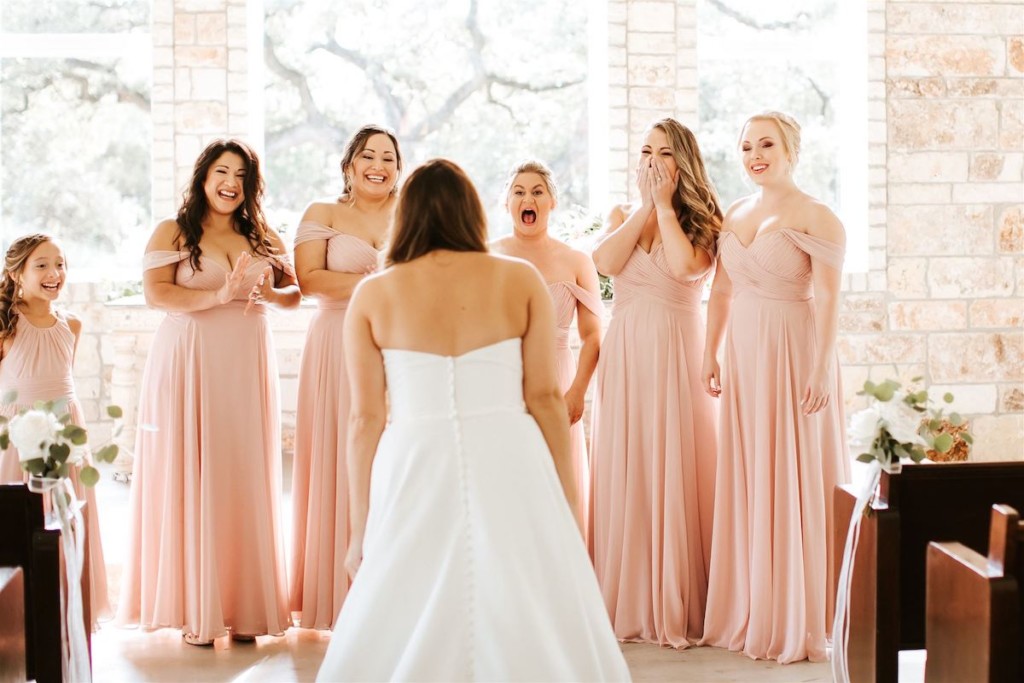 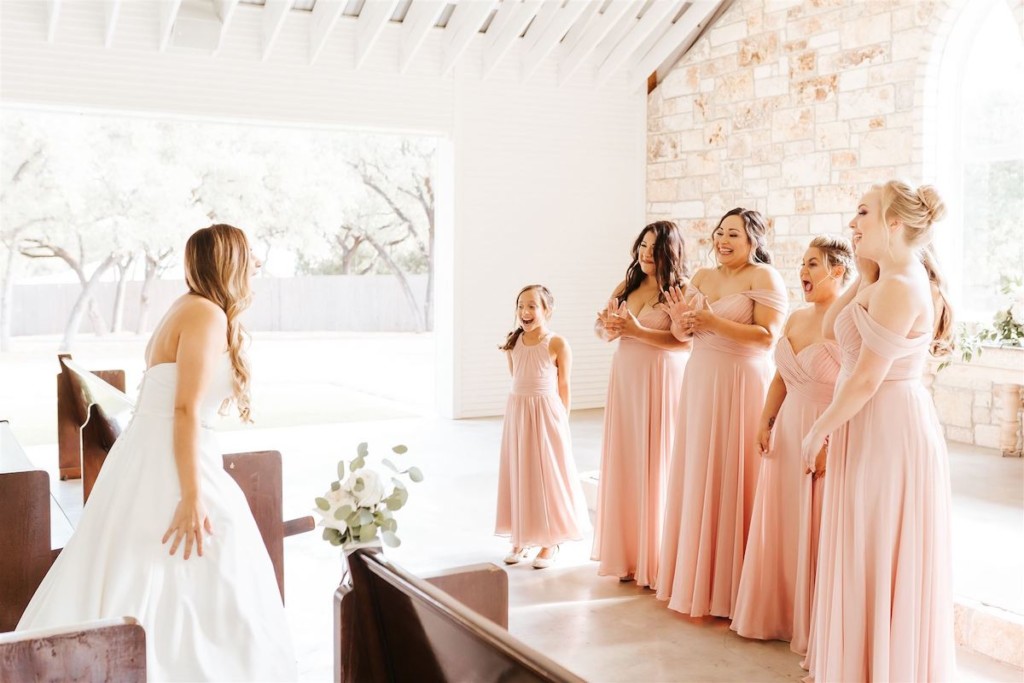 With that said though, we know a first look isn’t for everyone. If one of the above benefits spoke to you, there are things that you can do to get you some of those things without having to see one another first. If you want the best of both worlds, here are a few options for you:

Have a first touch.

We love first touch photos so much. Rather than actually seeing one another, you can take photos standing around the corner from one another and hold hands while talking to each other, exchanging gifts, or praying together. It’s a great way to have a moment together while still sticking to tradition. While it doesn’t let you get a ton of photos out of the way, it does give you an extra special moment together and lets you rid yourself of any pre-wedding jitters you might have.

If a first touch is a little too close for your liking, another option is to exchange letters with one another before the ceremony. You can write about how you’re feeling, the dreams you have for your marriage, what you hope the day entails, what you love about one another, or anything else. The letters can stay completely private or be read out-loud to be incorporated into your wedding video. You don’t have to