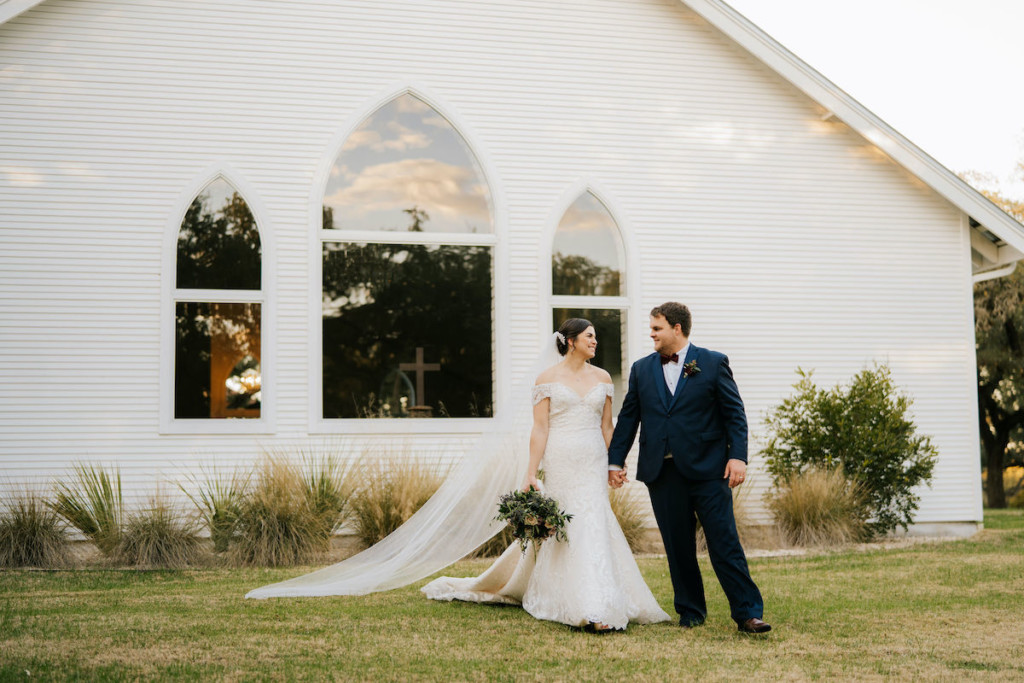 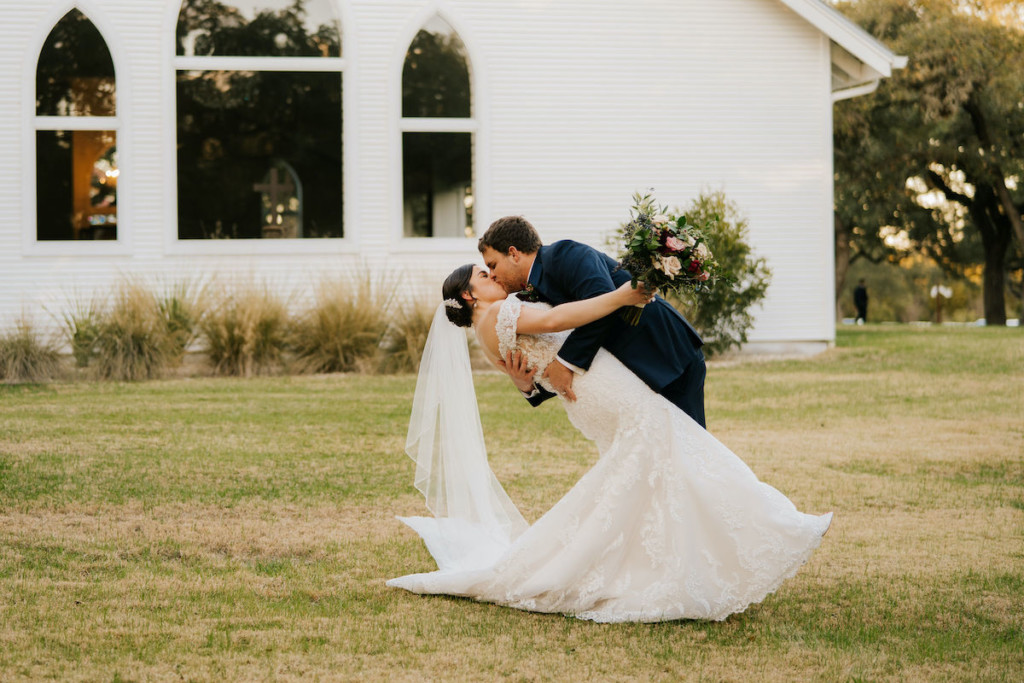 This might be a post about The Jameses wedding day, but we are completely and totally 100% in love with Weston, and you’ll see why soon enough. While we could talk about the Best Boy that stole the show all day long (and trust us when we say it was HARD to decide which pictures to share because there were so many we were in love with), Kelsey and Austen truly planned a day that we couldn’t wait to share with you. From rich maroon bridesmaid dresses and stunning florals to late night snacks and sneaking away for portraits long after the sun set, we know y’all are going to love this day as much as we do. Keep reading to hear about how they met, their best advice about wedding vendors, and what made their ceremony so special. 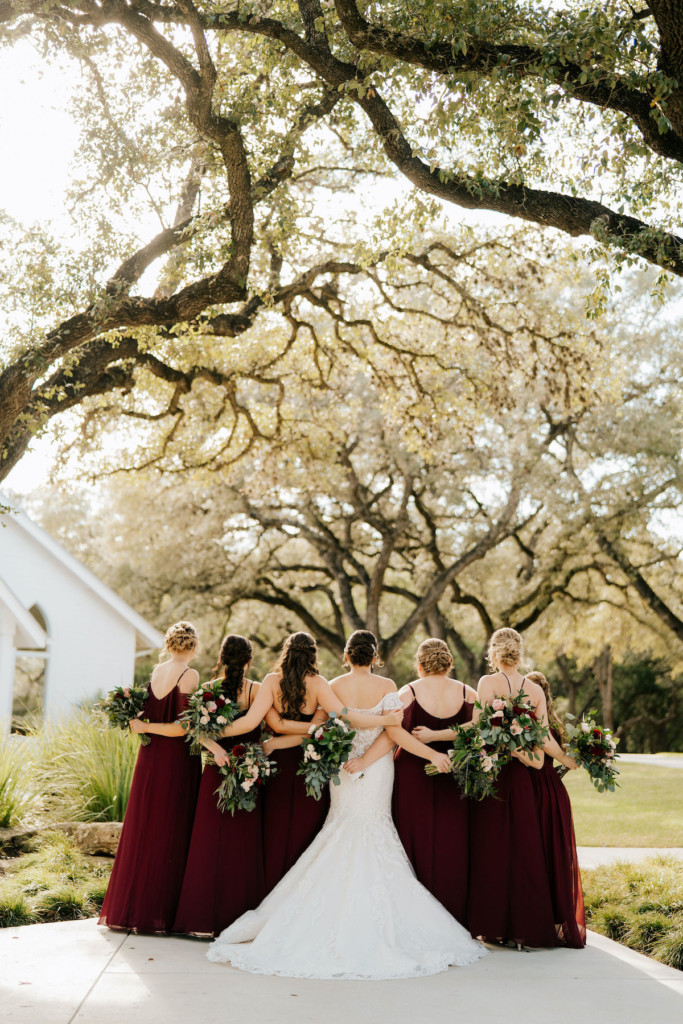 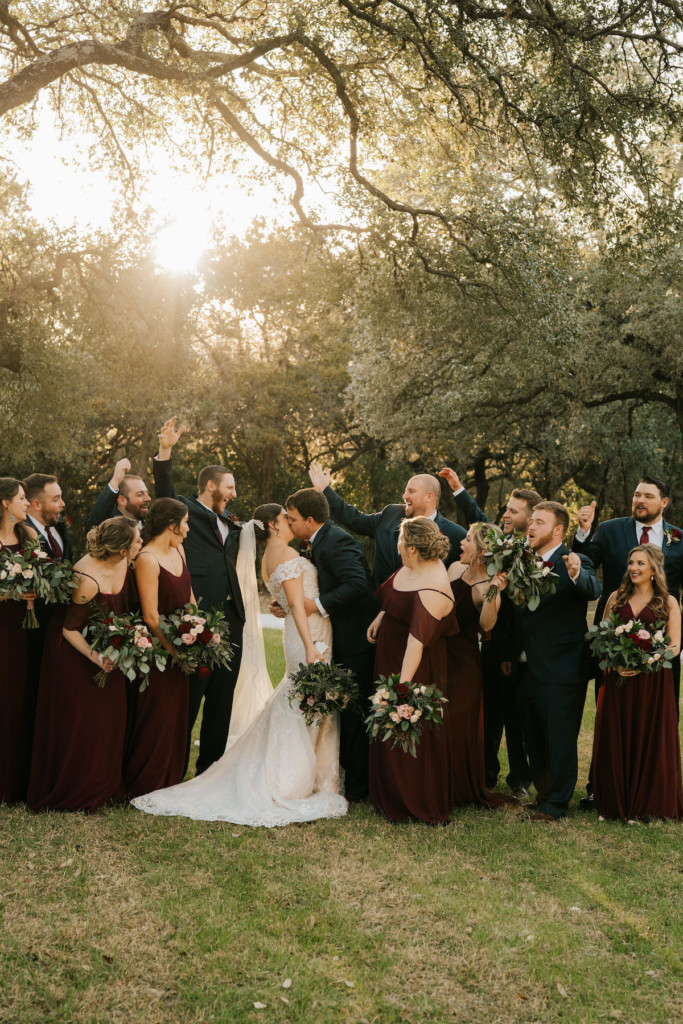 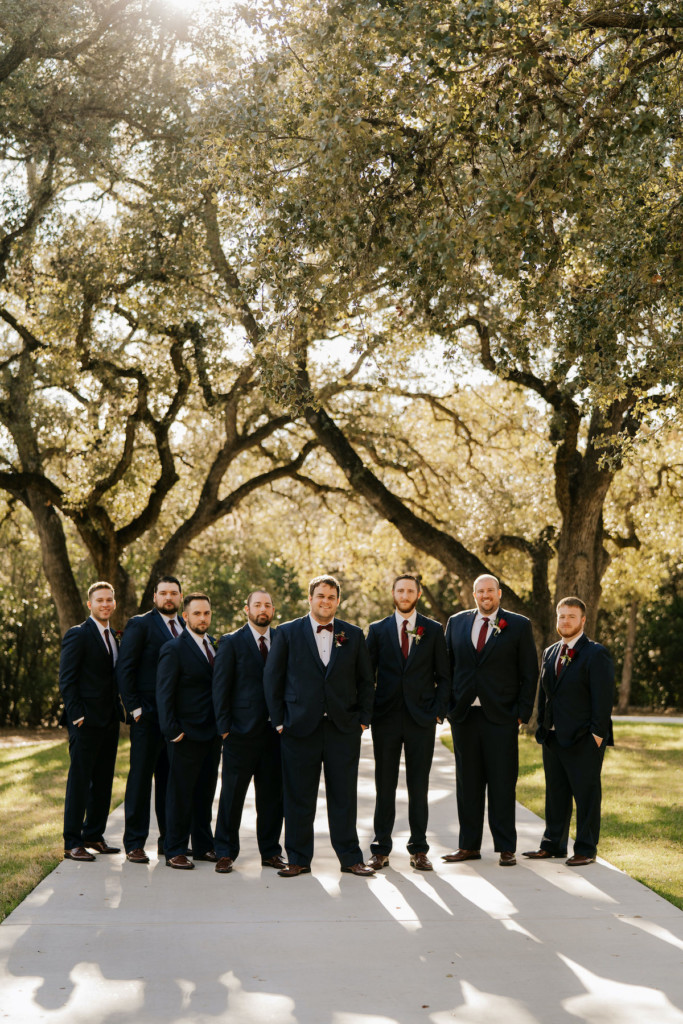 On Friday, April 26th, 2019, Kelsey was about to leave work after a busy day when her friend, Christine, invited her to grab a margarita with her at El Tiempo. After a busy week, it was just what Kelsey needed and agreed. On the drive to El Tiempo, Christine told her that her husband, Chris, was meeting them there and his friend Austen was coming too! That was the night Kelsey met Austen. Funny, they didn’t say more than a couple of words to each other over dinner, but chatted more when the group grabbed some drinks after dinner. The next day, Austen asked Chris if he had a chance with Kelsey and Kelsey got a text from Christine with Austen’s number saying that he wanted to take her to dinner, but it was up to her if she wanted to text him with her number.

Kelsey texted him, and that Sunday they went on their first date! Austen kept the date activity a surprise until they drove up to Putt Putt Golf. They played a regular game, then a game playing only left handed, and then a game putting between their legs. They may have gotten some funny looks, but they laughed so hard and had the best first date!

Three days later, on May 1, 2019, Austen made it official and asked Kelsey “so are we a thing?” She quickly said yes, and little did she know it was the best “yes” she had ever said.

Kelsey & Austen fell in love that summer spending time at the beach and the river, hanging out in the backyard, cooking together, working on garage projects together, fishing, more games of putt putt, and just getting to know each other.

Then on March 7th, 2020, Austen got tickets for Kelsey to go to the Houston Rodeo with one of her best friends, Kelly, while he drove to San Antonio to meet Kelsey’s parents to ask permission to marry her. That night, after Kelsey got home from the Rodeo, they went on a drive. Austen parked the Ram truck that had taken them on so many adventures during their love story, and in that truck that held so many memories together, he proposed! And of course she excitedly said yes! 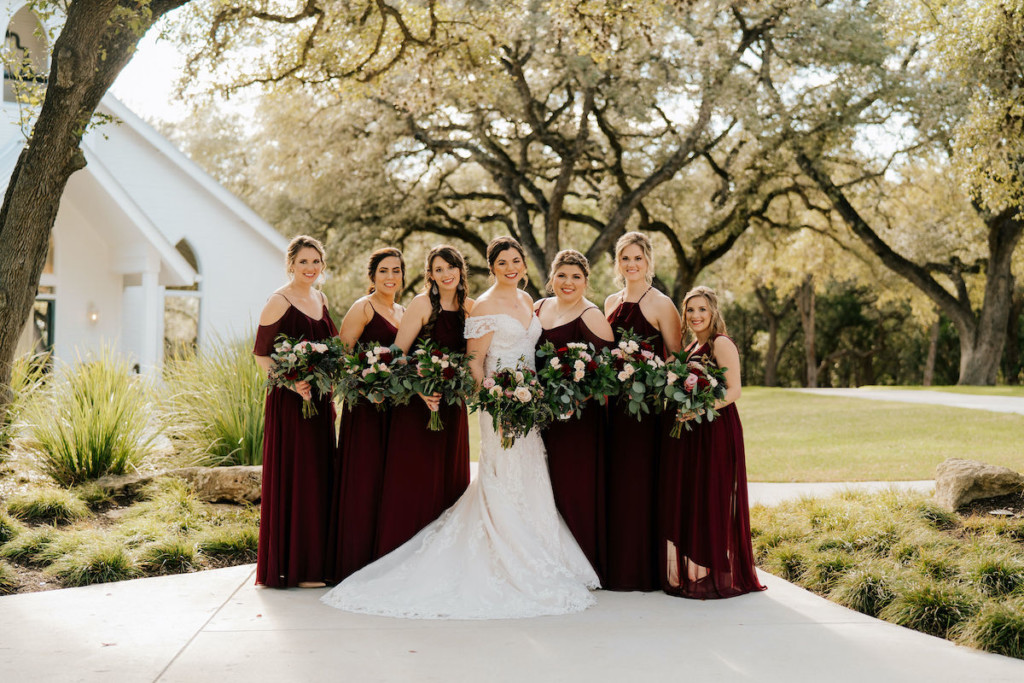 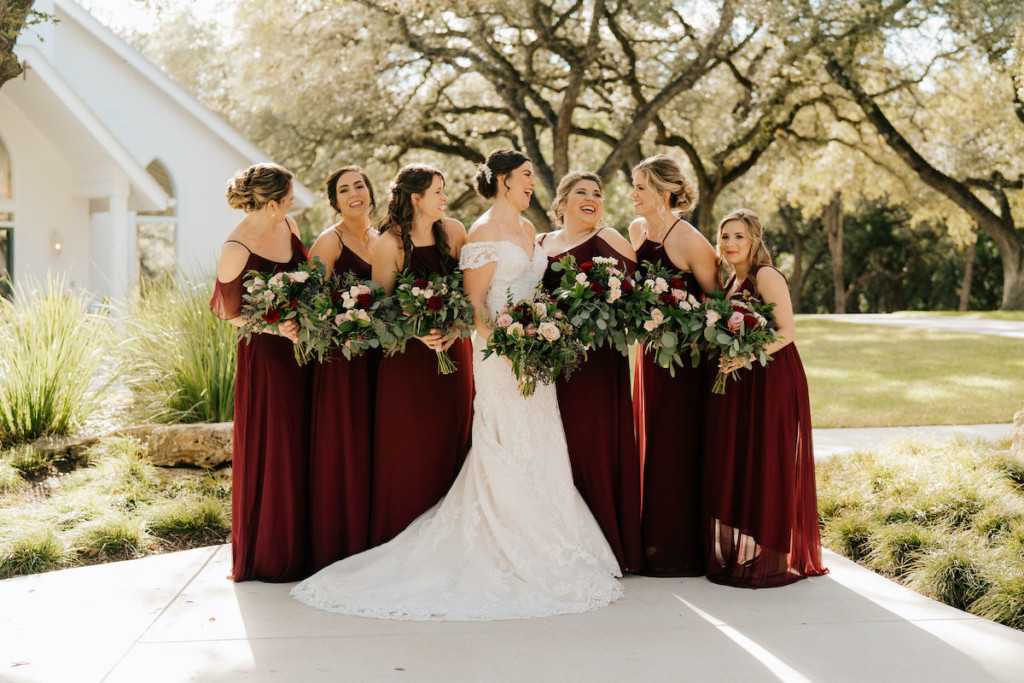 As soon as I walked on the property, I knew it was where we would be getting married! It just felt so completely like us.

Quiet, outdoors, beautiful oak trees, and New Braunfels/Gruene held so many wonderful memories during our love story (lots of river weekends! 🙂 ). I knew I wanted a venue with a Chapel, and I absolutely loved the old pews. It’s simplicity and natural beauty were exactly what we were looking for. Everything felt just right. I also loved that both the ceremony and reception were at the same place, so no one had to travel between.

One of the best things about being a Chandelier Couple was many of the cool features you don’t get at other venues (up lighting, fire pit, having lots of space for the boys to hang out and play football lol). It was also so beautiful in itself that we didn’t feel we had to add too much decoration.

I also loved that it is family-run. You feel very much cared for and cared about by the entire Chandelier family. I feel like they shared in our excitement! 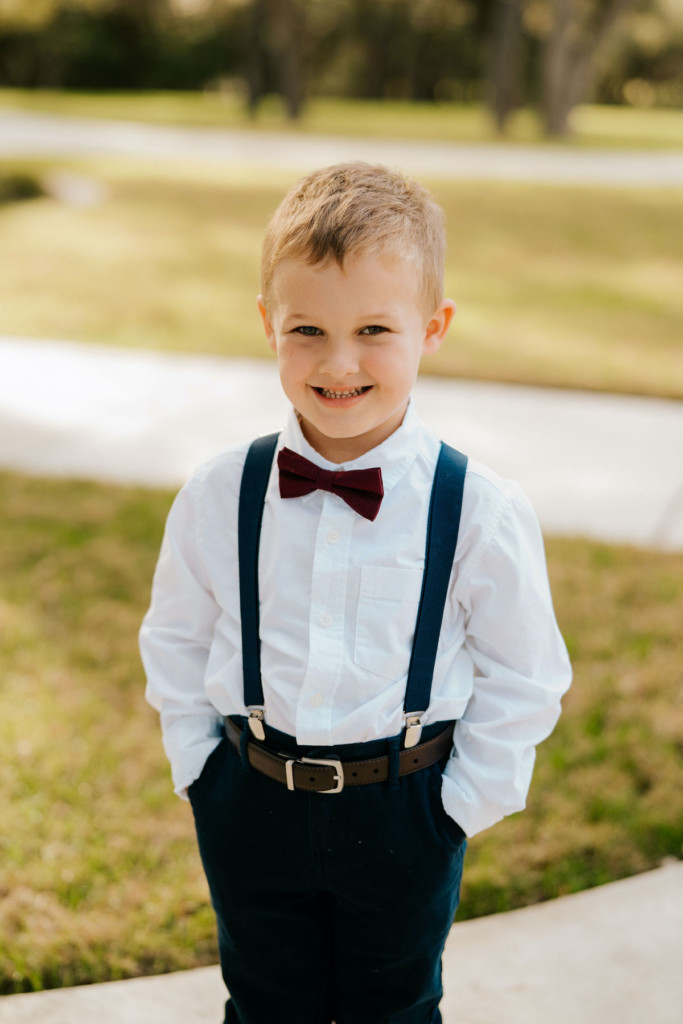 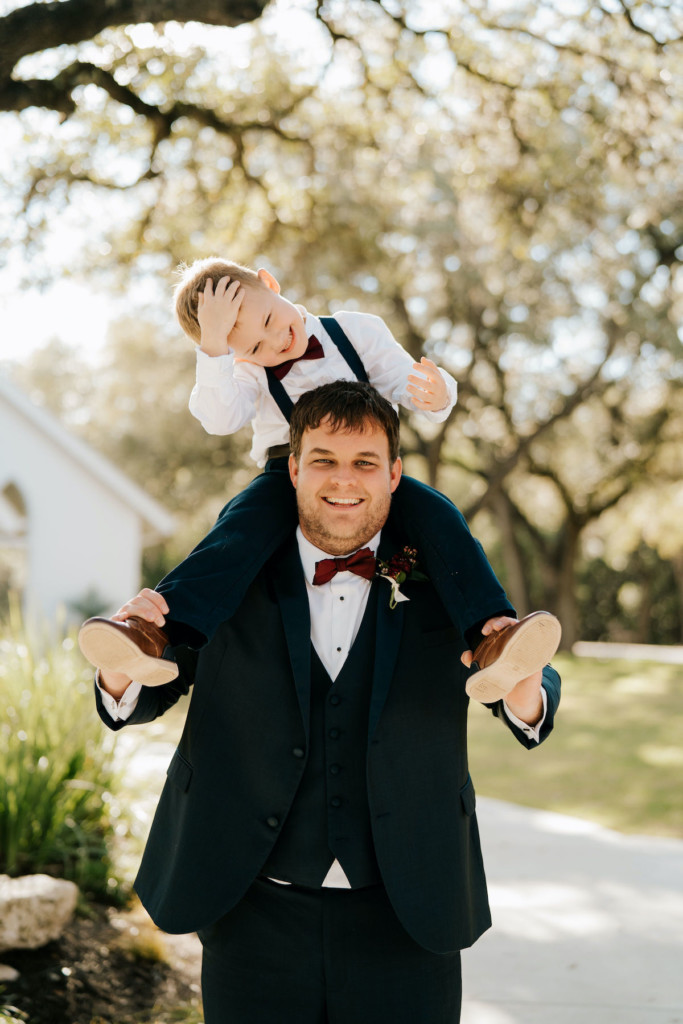 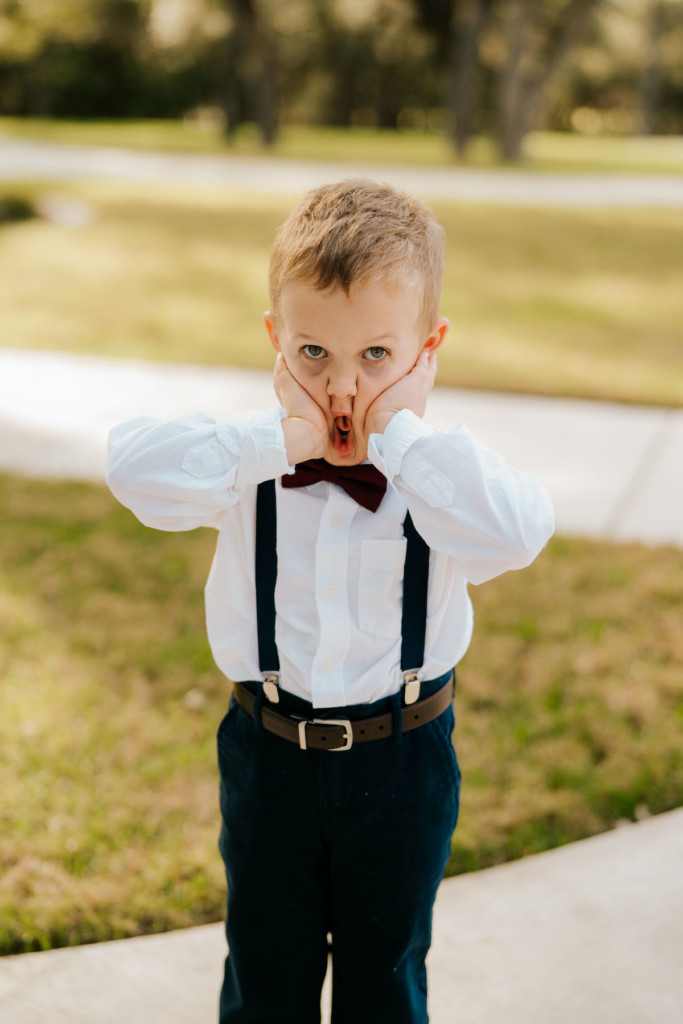 The doors of the chapel opening and seeing Austen at the end of the aisle. Also, our first dance under the chandelier.

I would say really get to know your vendors. We had some that we absolutely loved and some I later found out that our personalities weren’t a great match. It was hard planning during COVID, via virtual meetings, but try your best to meet with your vendors in person. 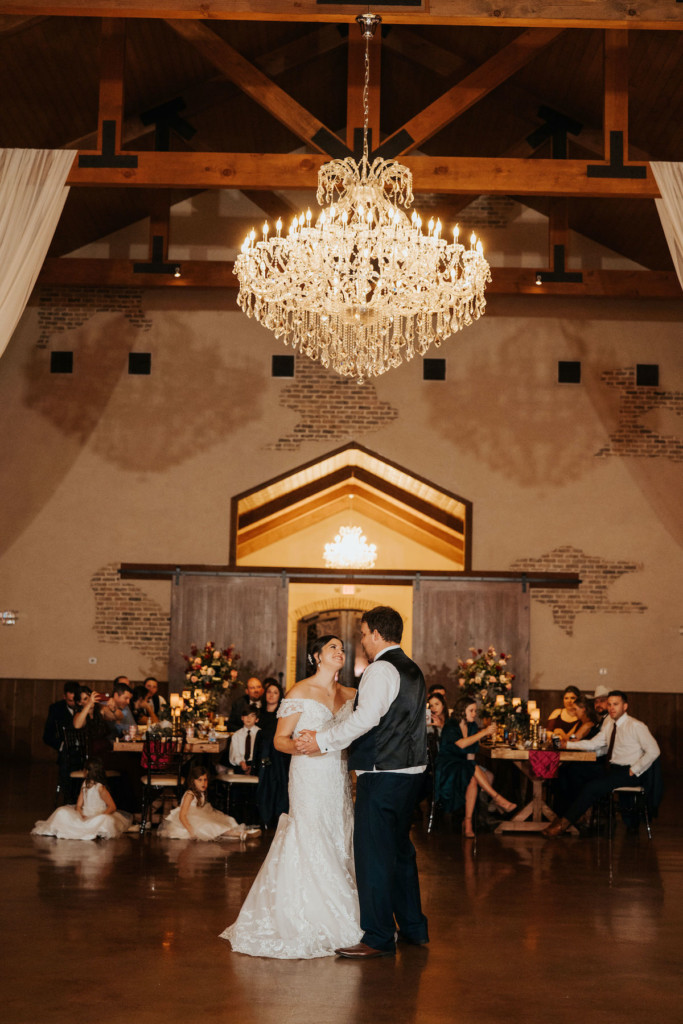 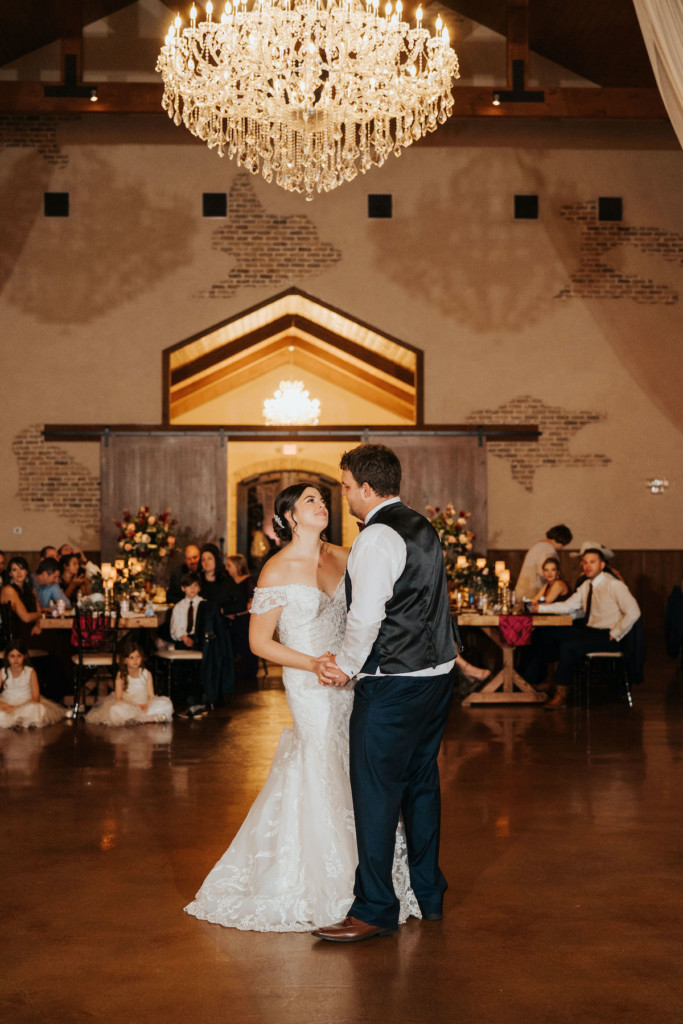 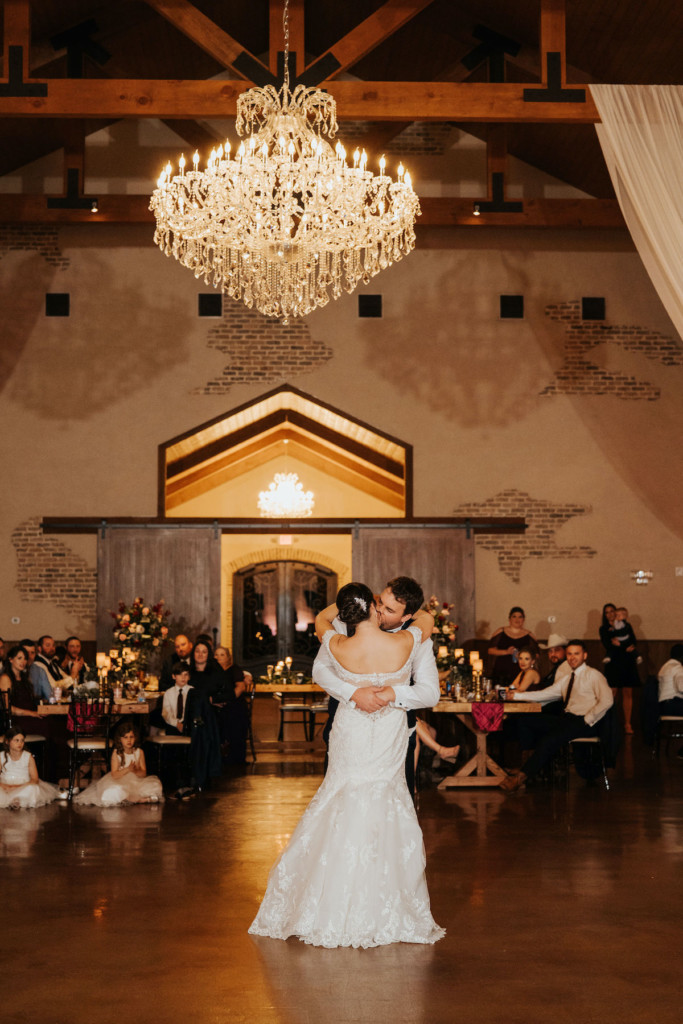 Late night snacks are an AWESOME idea! Everyone was talking about that.

Night shots with your photographer is a great way to steal some time with just the two of you. Ashley was amazing and after she took our night shots, she gave us some time just husband and wife away from everyone at the reception. 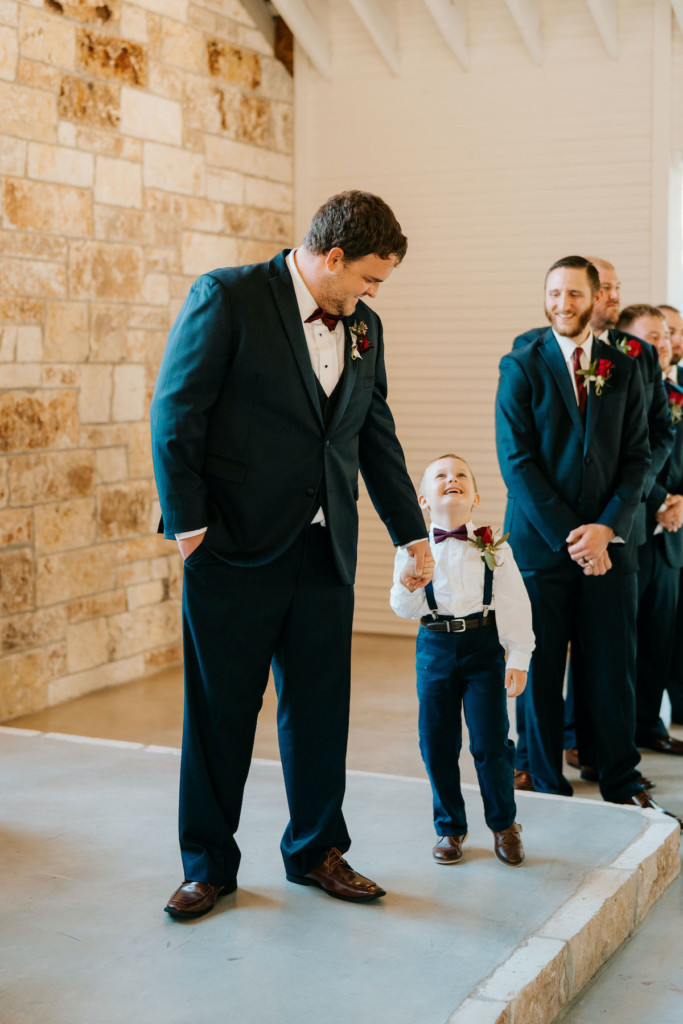 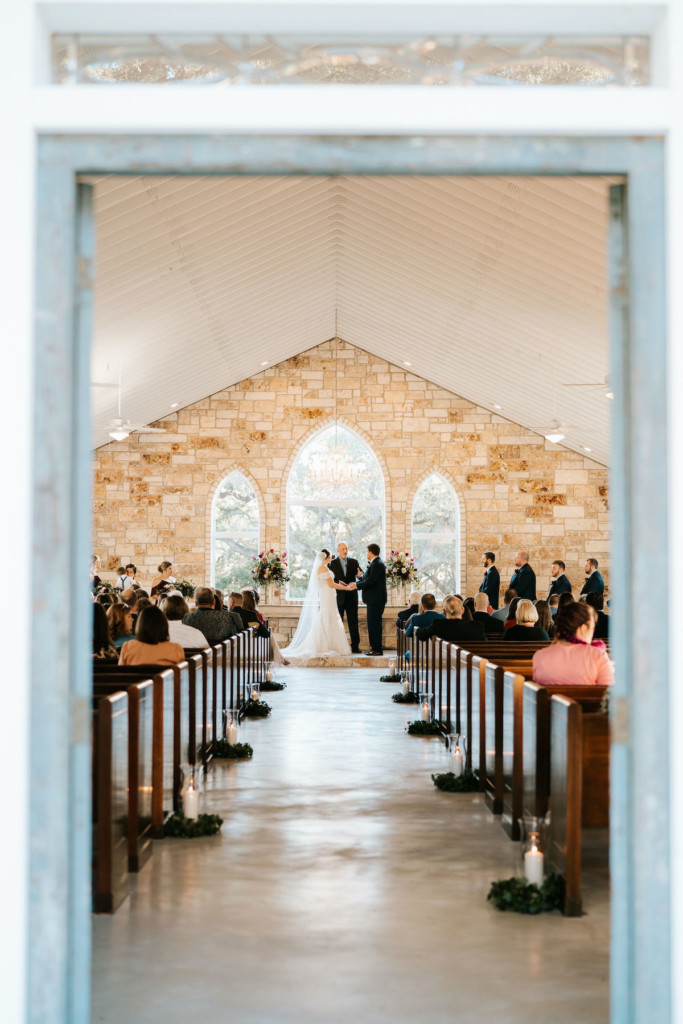 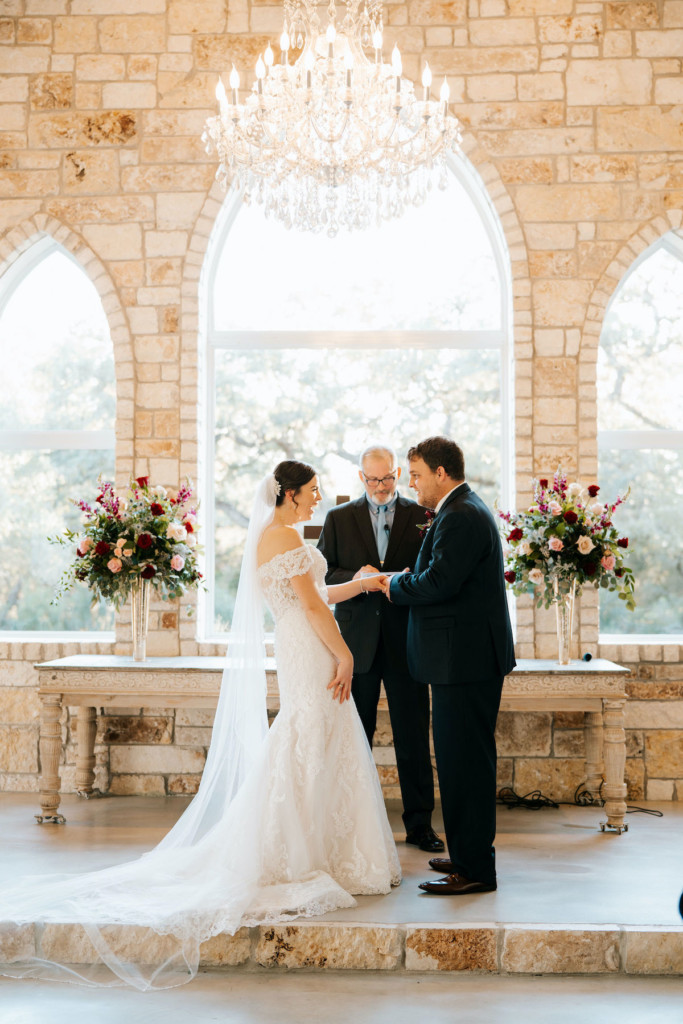 Austen has a little boy, Weston, who is 4. When we were talking about his role in the wedding, Austen said he didn’t want him to be the ring bearer, but that he wanted him to be his “Best Boy” because we were becoming a family and I wasn’t just marrying him but both of them. I absolutely loved having Weston up there with us, and it made the ceremony that much more special. It wasn’t just the day Austen and I got married, but it was the day that we officially became a family.

The Fire Pit was such a hit! A bunch of our friends enjoyed going outside where it was quieter and to cool off after dancing inside! 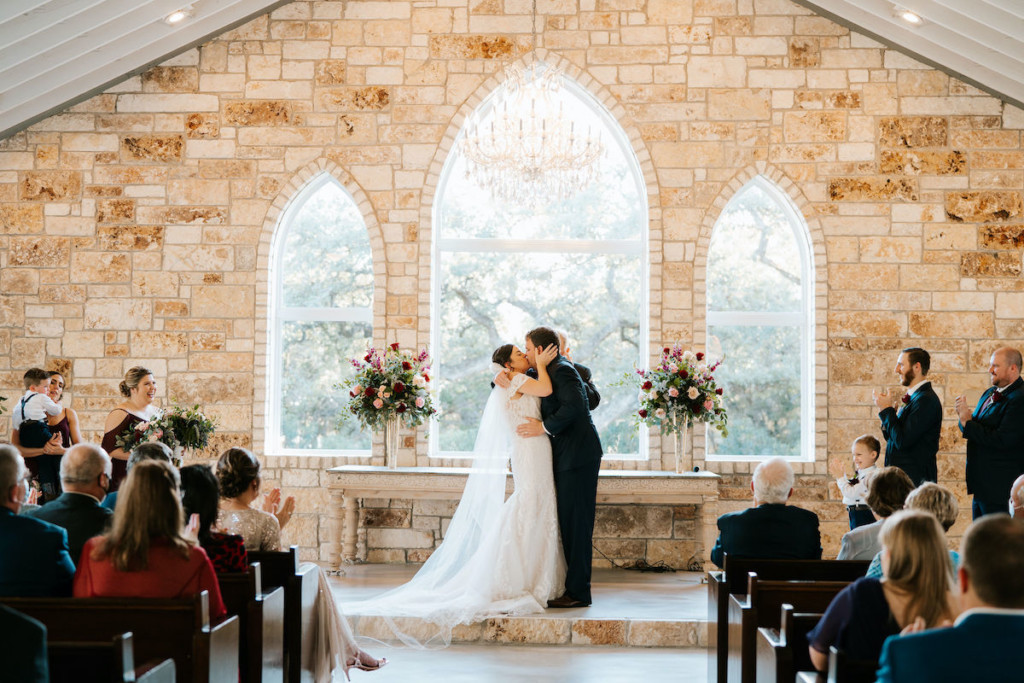 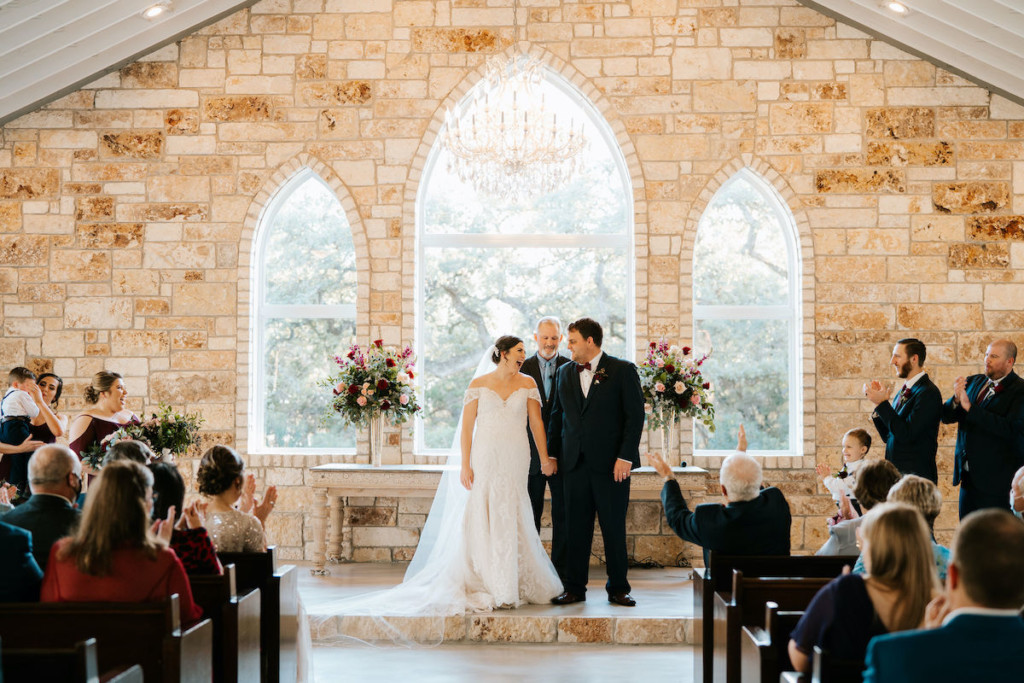 Ashley Medrano Photography was absolutely amazing!! My husband (who hates taking pictures) even said she was awesome and didn’t make him do anything “goofy”. Haha! We just got our pictures back and they are even better than I imagined! They are so beautiful and she really captured the joy of the day.

Freesia Designs did our floral and everything was beautiful. She was awesome because she also did a bunch of candlescapes and let us use a bunch of vases at no additional cost other than for the flowers. 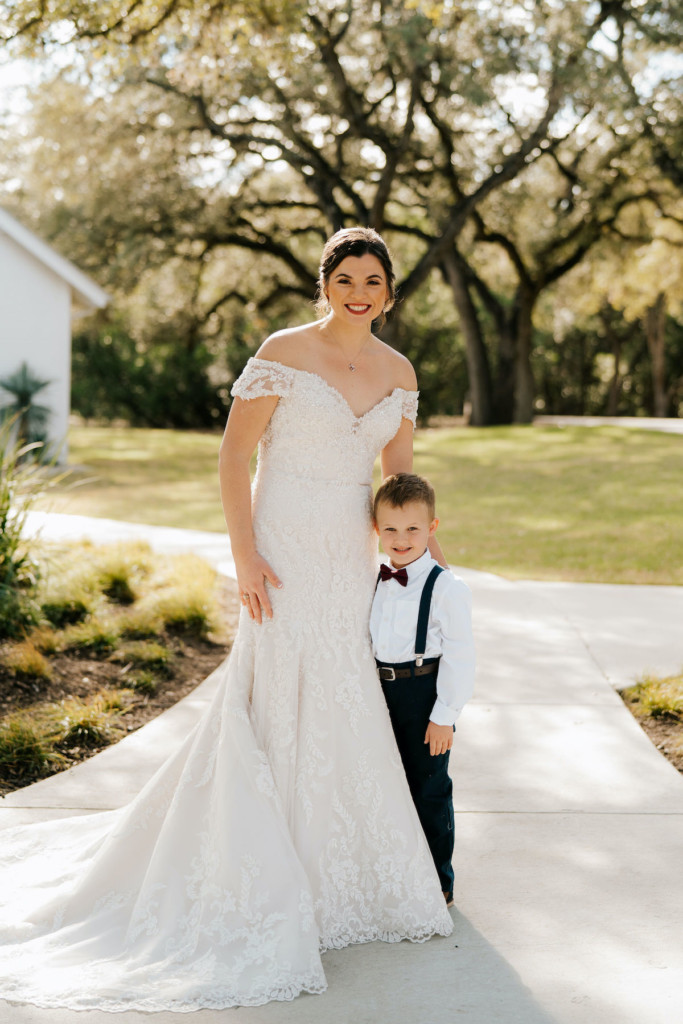 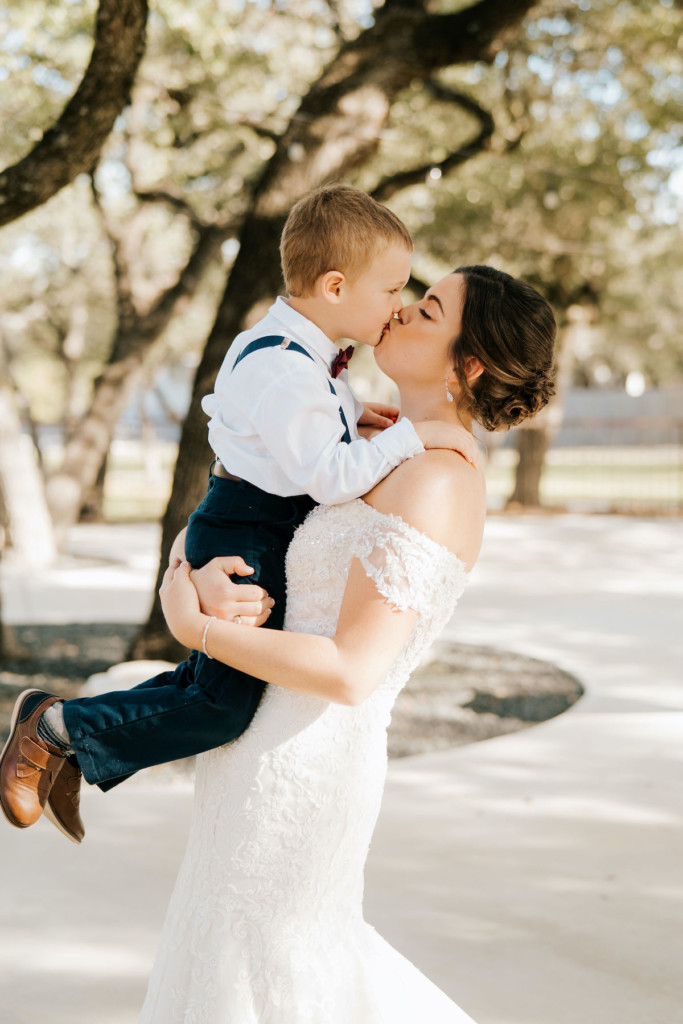 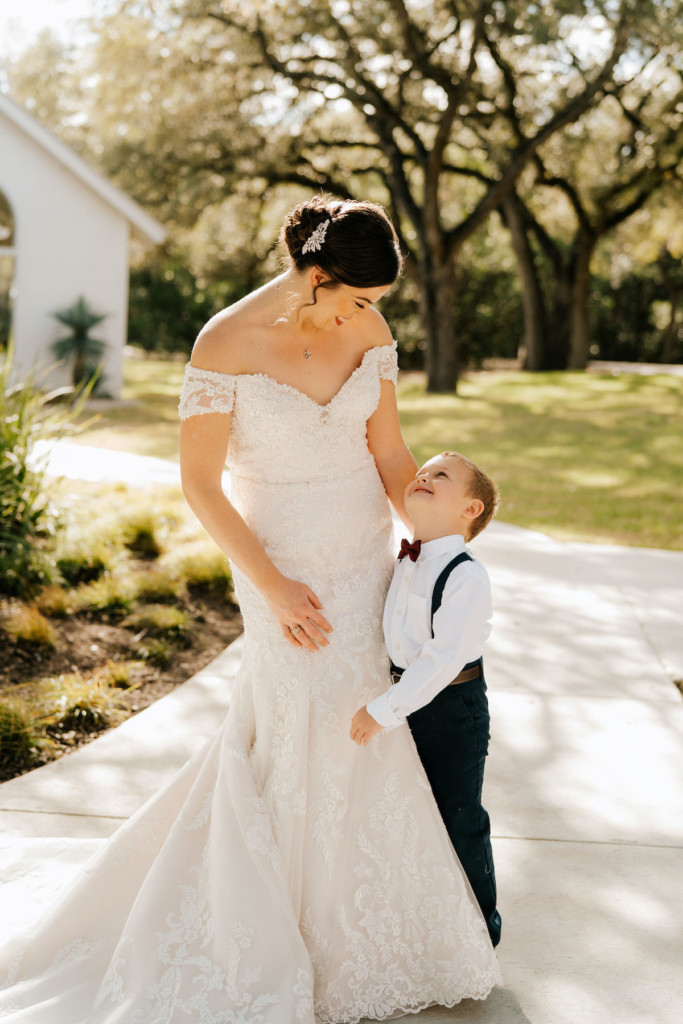 When You Know,You Know

Funny story, my dress was the first one I tried on at the first (and only) place I went. I just knew it was the one (just like Austen!). 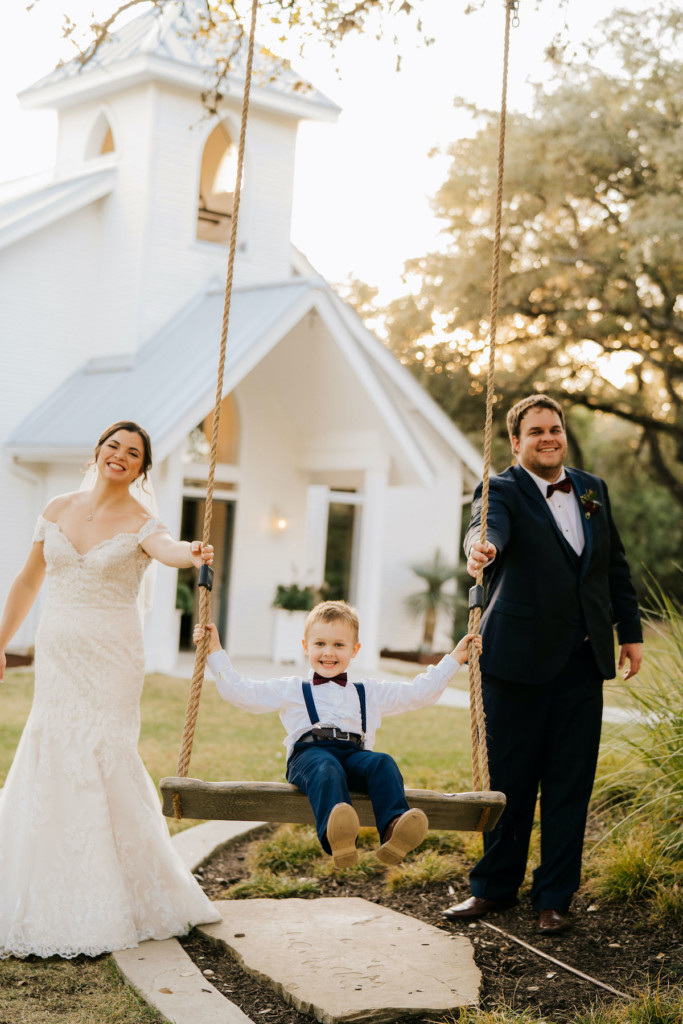 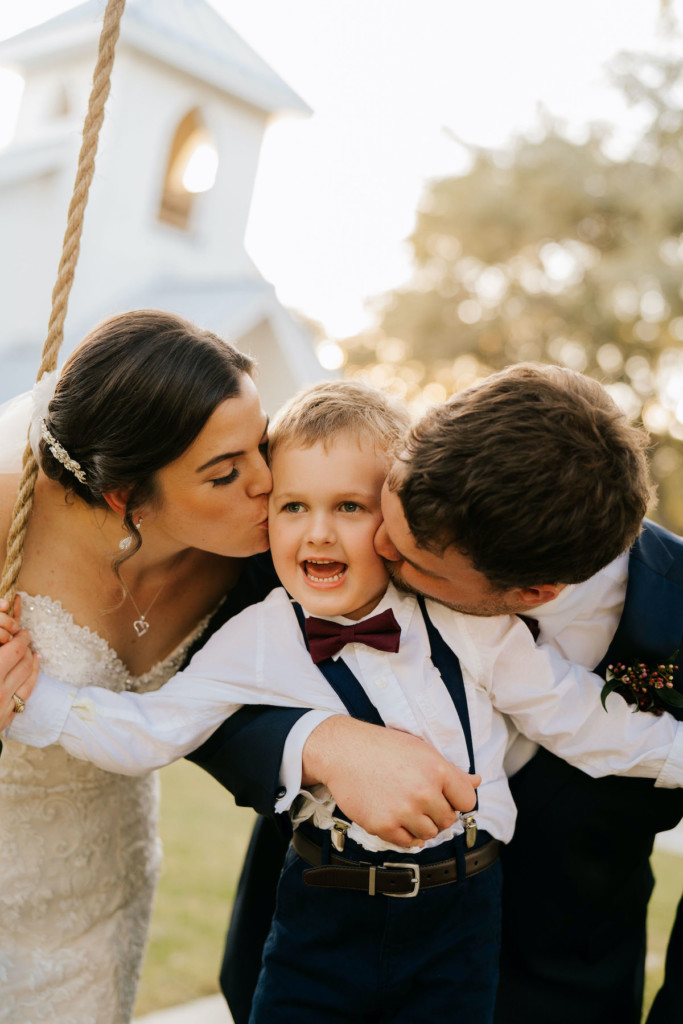 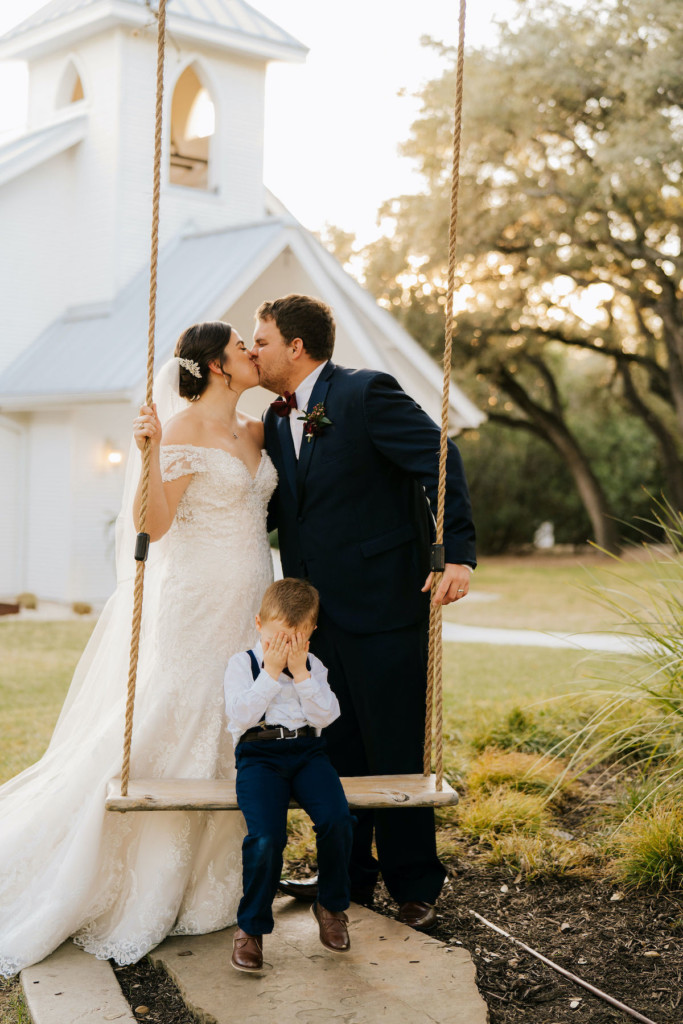 We could say it again and again, but we truly love this sweet couple and their family so much. Kelsey mentioned that one of the things they loved about being a Chandelier Couple is the fact that we are family run and share in the excitement of our couples. It warms our hearts beyond measure that our couples recognize that because we constantly feel so lucky to get to experience these days with you. Whether you’ve gotten married here, plan to get married here, attended a wedding or event here, or just hang out with us on social media from time to time, we’re glad you’re here. Thank you for being a part of our family. 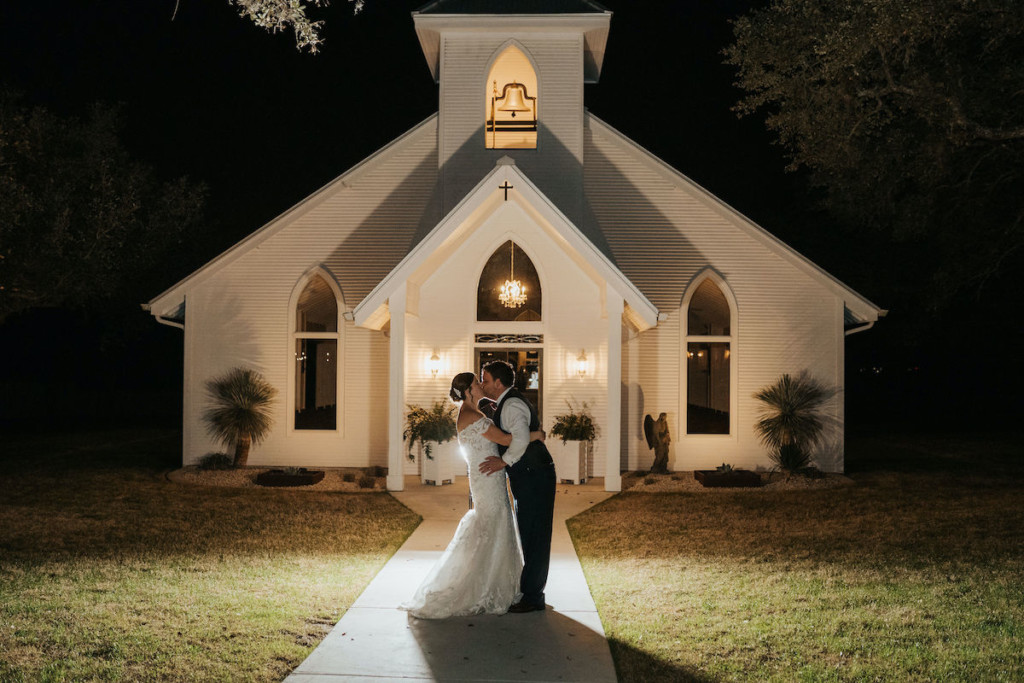 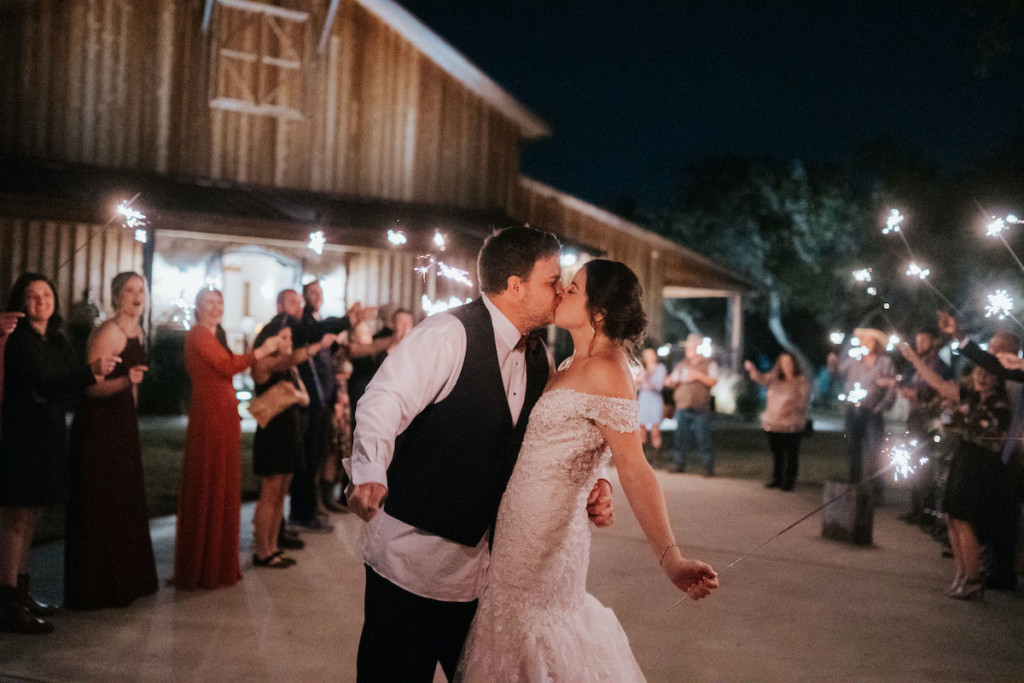