While Corey and Stacey met in middle school, it wasn’t until years later that social media brought them back together (twice!). We’re thanking our lucky stars that it did, because we truly couldn’t love these two more. Stacey fully embraced wedding planning before hiring a coordinator for the final touches, so keep reading to see all of her advice about attending open houses, following vendors on social media, how they personalized their big day, and the traditions they knew they had to have. 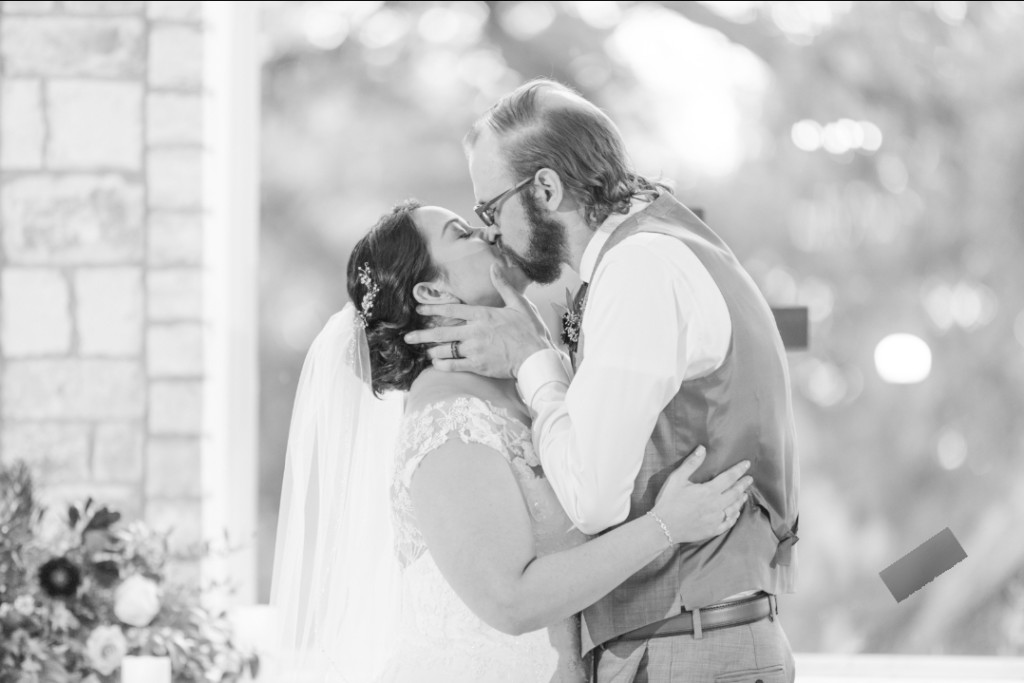 Corey and I first met when we were in middle school and grew up a neighborhood apart. Each of us claims that we had crushes on the other but I’m not sure either of us really remembers. I do remember thinking the spikey headed, blonde boy was cute! We essentially went to the same high school (I went to a magnet HS on the same campus of the larger HS he attended) but our paths never crossed and we lost touch. Fast forward to 2009 when he sent me a Facebook message catching up on where life and college had taken us. We exchanged messages back and forth for about a day then it fell off again and we lost touch. Fast forward again to August 2015 and I was sitting at my desk during my lunch break just browsing through old Facebook messages. I came across the message he had sent to me in 2009 and I decided to send him one not thinking he would ever respond. But he did, almost immediately! And since that day we have never gone a day without each other!

We hadn’t even discussed engagement when I first came across the Chandelier. I was once again on Facebook on my lunch break in 2017 when I came across a promotional video and I just absolutely fell in LOVE with chapel. I always envisioned myself getting married in the Catholic Church but knew that if my partner was not comfortable with that then I needed an alternative. I remember being with Corey’s family July 4th weekend that summer and showing his sister where I was going to get married one day, regardless of who my groom was! 2 days after Corey proposed I was emailing The Chandelier to find out availability! I mean, I contacted The Chandelier in 2017 to get 2018 pricing! I was serious. 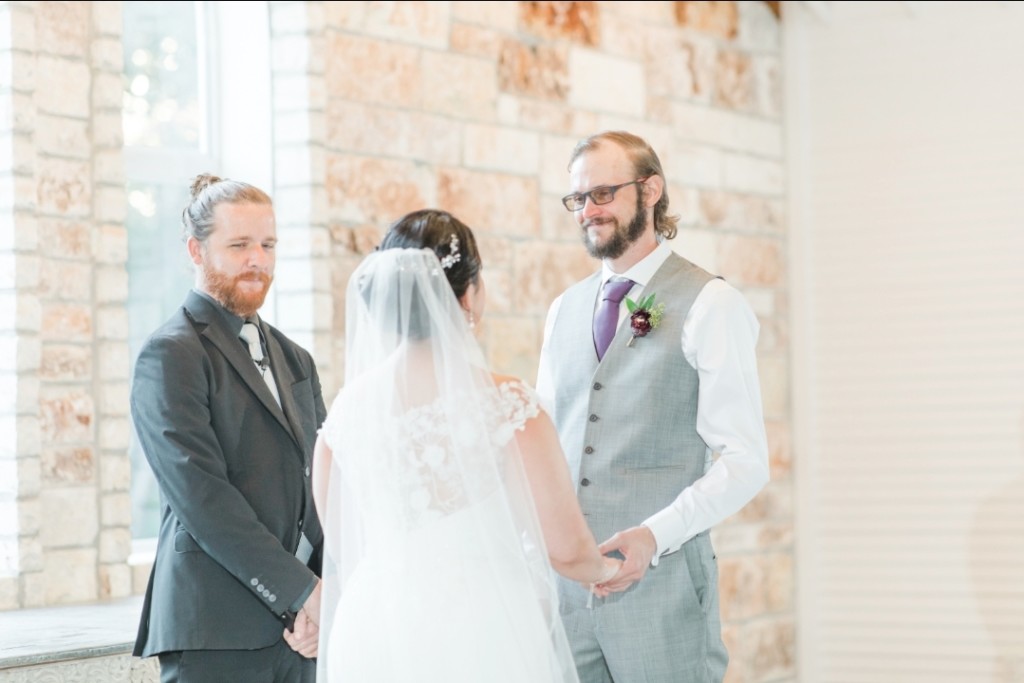 We are both very traditional people and I believed that would come across in my wedding. But there were a lot of “traditions” I didn’t want to follow. However, one that I was adamant about was not seeing the groom before the wedding. I stayed at my parent’s house the night before, didn’t see him at all, and didn’t contact him at all except for his groom’s gift. We did first touch pictures but that’s it. It took everything in me not look out the window while he was taking groomsmen pictures. But it was so worth the wait and anticipation to have those blue chapel doors open and see my future husband looking at me. We both had tears and I had to exhale long and hard to not lose it as I was walking down the aisle with my dad. I always made the joke that if he wasn’t crying when he saw me for the first time in my dress that I would walk back up the aisle and we’d try it again until he cried but luckily I didn’t have to do that! It was a moment I will remember for the rest of my life.

Attend open houses! I attended the open house The Chandelier hosted in January and just about picked all of my main vendors that day. It definitely helps to research venues, look at their preferred vendors (if they have them on their website (or email and ask)) and understand which ones will be at their open house because a lot of them will offer discounts if you book them that day. As much research and price comparisons you can do ahead of time the better. Also, begin following photographers, florists, coordinators, hair/makeup artists, and venues on Instagram and Facebook. You’ll really get a sense of their style and see if you like the look of their services.

I loved finding special ways to incorporate both of our personalities and little inside jokes that mean a lot to us. Corey and I always argue who loves the other more, so when it came to finding a cake topper, I found one that said “Love You More” and it worked perfectly for us. We also both collect Funko Pops so I had some custom made to look just like us on our wedding day. So much can be found on Etsy and you get to support small businesses at the same time.

When all is said and done, your wedding day is about you and your partner celebrating the love you share. I tried to take everyone’s advice and just relax (which isn’t in my nature). One thing that seemed to be an inconvenience at first was having to hire a coordinator. I did the 95% of the planning without one and chose to have them help with the day of; most of the coordinators I spoke with offered different levels of service ranging from engagement to wedding to just the day of. But this person was a life saver the closer it got to the wedding. They handled the coordination of vendors, final payments, set up, tips, etc. It really allowed me to be present and enjoy the time I had with my mother, mother-in-law, and bridesmaids. 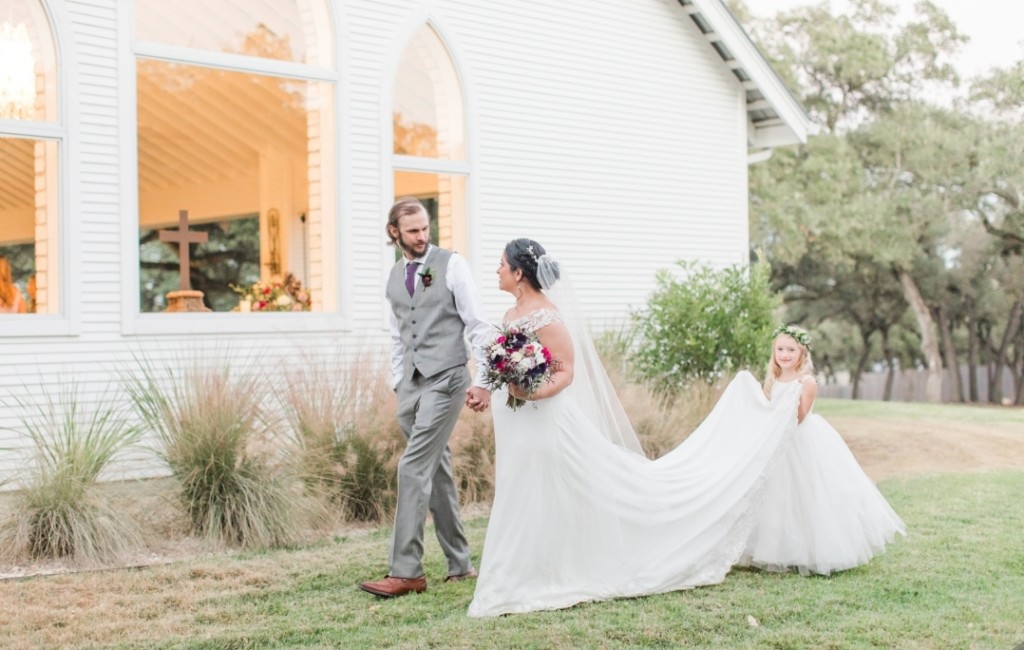 I mentioned before that I found I didn’t want to follow a lot of wedding “traditions”. One that Corey found very different was my extreme interest in blush colored wedding dresses. Just about every wedding dress picture I found that I liked/loved was a blush colored dress. He wasn’t wild about the idea of a dress that wasn’t white; to him that isn’t a wedding dress. So I was very surprised that the dress I chose was white (ivory). I kept up the ruse that my dress was blush though, just to keep him on his toes and really surprise him when he saw me walking down the aisle. 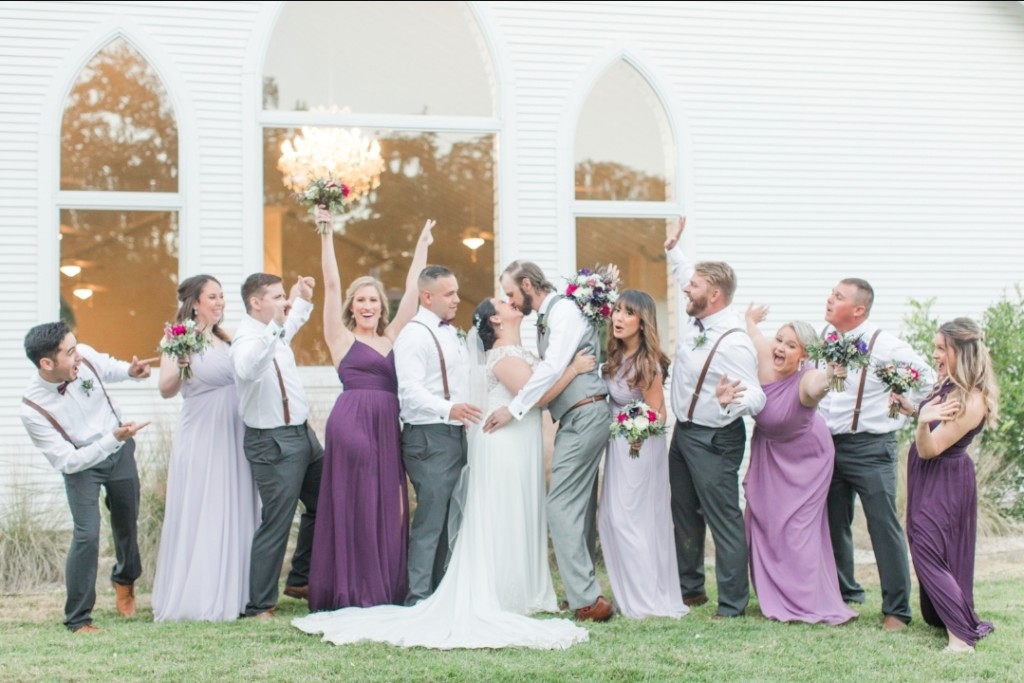 One of our favorite aspects about Texas Hill Country weddings is something that The Hughes totally nailed – the backdrop is perfect to bring in your own flair. The blend of purple dresses, grey suits with brown suspenders, and bright colored flowers totally popped against the chapel and outdoor areas. Beyond that, though, they really worked to create a day that was reflective of who they were. Stacey might have known The Chandelier was for her from before they were ever engaged, but they really made it theirs with the personalizations they made. And, at the end of the day, she said it best – “your wedding day is about you and your partner celebrating the love you share” and that’s exactly what they did.

Coordination/Floral by Sophie Schiller with Touch of Whimsy

Catering by Martha Valadez with Got It Covered Events